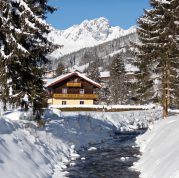 On 11 March 2012, the Swiss people decided to limit the number of second homes in each municipality to 20%. On January 1st, 2016, the Federal Law on Secondary Residences came into force. It distinguishes existing housing from new building.

Existing housing consists of what existed before March 11th, 2012 or what was allowed to be built according to a building permit in force on that date. Such housing has a free allocation. It can be used as primary or secondary residence. The owner can therefore rent his property to a person who makes it his home without fear of losing its status as a second home. Similarly, if he has occupied it as his own principal residence, he is not deprived of the possibility of subsequently selling it as a secondary residence.

Such housing can be renovated, transformed and rebuilt without losing its status as existing housing. It may be extended at a rate of 30% of the main useful areas, as long as this does not result in the creation of new second home units. If the expansion exceeds 30%, the building loses its status as an existing building and a second home assignment is no longer possible.

In the affected municipalities, the only new buildings still allowed are (housing being defined as a room with a kitchen):

The law still provides some exceptions for a protected or site characteristic building, an old hotel that is not profitable or a new hotel where 20% of the surface area is allocated to secondary residence (under very strict conditions).